I’m really really not a big fan of WordPress (running my current site) so I’ve been looking for alternatives and recently I’ve found a new CMS that’s caught my fancy.

A different CMS will obviously not make me create more content, but my developer heart feels better working with a nicer framework.

So, until I’ve moved enough stuff over, I’ll just have a link to the new content:

…and yeah, I also crave for a custom self made design, but I’ve got to be realistic with my available time.

The Atom editor is a very versatile and extendable coding editor made by the folks from GitHub.

Being extendable also means that the functionality out of the box is pretty limited. I therefore have a personal collection of plugins that I find interesting:

This is an experiment to test various techiques for car material setups.

I took a pre-existing mesh from a McLaren MP4-12C (sorry – I don’t know who made it) and created proper UVs and the corresponding occlusion maps for it in MODO.

The yellow car paint material is just the standard shader from Unity 5 (at the moment). Lighting is generated by a direction light and a HDRI map, which can also be seen in the background. Reflections are rendered with a reflection probe, but not yet utilized effectively. Linear and HDR color space are used for rendering, together with the usual depth of field and vinette image filters.

I used a shader that I created with Shaderforge for the color variations. Goal was to create a shader that would be able to do normal color paint and silver or metallic paint simply by adjusting the parameters. At the moment I can’t use the PBR shader, since Shaderforge doesn’t give me enough freedom with the shading. Therefore I input the individual environments as cubemaps and calculate the shading myself. Not yet perfect, but getting there.

It’s been much too long since the last update, and since the design is also getting quite rusty, I’ll now be upgrading the whole site. This will probably break things here and there along the way, but bear with me.

This is a small tool that shows all trains for a particular route. The trains are shown in a timeline with their trip times running from top to bottom. Delays shift the bars further down with the original trip time appearing in red beneath the actual bar.

The system reads the data from the train services’ delay page. The html code is parsed with an array of regular expressions to extract the desired information.

I must admit that I feel stupid for not having realized this earlier but I was updating / dual using Unity 3.5 and 4.0 as well when this happened, so I was a little unsure what was causing it, but here goes:

If you access your Unity project on a network share (like: \\server\project\game) then it will run quite well except a small error that pops up in the logs:

UriFormatException: Absolute URI is too short

This is part of the interface that is supposed to link Unity and MonoDevelop together and it is trying to tell you that it can’t generate the solution files (.sln) that MonoDevelop needs to properly integrate into Unity. It’s failure is mainly noticable because MonoDevelop’s intellisense or code complete completely stops working, degrading Mono to a simple text editor and making it very much frustrating to work with it.

If you are unsure if you are having this problem then simply try to use the > Assets > Sync MonoDevelop Project menu. That should instantly generate the error in the logs.

The easiest solution (besides having your project files on your local harddrive) is to map the network share to a network drive and everything will be ok. 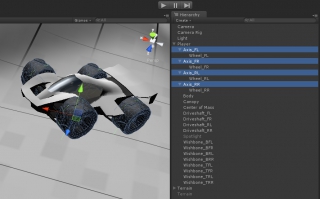