Added a whole new track with better curves and everything.

I tried to build the track from separate segments which I wanted to combine in Unity but it was quite tricky building all parts in Lightwave and then getting them to fit in Unity. Therefore I prebuilt the track and imported it as one model in Unity. This should also be better for lightmapping, surfacing, etc. but I’m still quite far away from that. 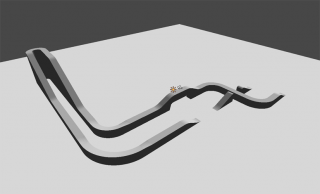 I also added lap-tracking and repositioning of the player (if you get stuck). The turbo will also not be unlimited anymore, which is now indicated by a couple of dials on the right side of the display.

You’ll need the turbo to get over the last jump and it will also help greatly managing the first climb.