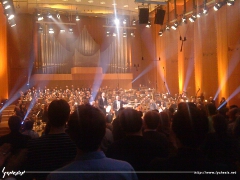 “Symphonic Shades” was Chris Hülsbeck’s dream of bringing a whole concert with his videogame music to life with a proper symphonic orchestra into reality. The first concert was sold out within days of it’s announcement and I was one of the lucky ones to find out in time to get a couple of tickets (later a second concert was announced for the same evening, three hours later, which sold out just as fast)

I was very excited to be at this concert as this was my very first videogame concert. I had already listened to renditions of Final Fantasy from Nobue Uematsu, but never live, and I was used to these concerts and remixes sometimes sounding a bit strange.
I am a great fand of Chris’s Amiga music and I have also bought nearly all of his Soundtrack CDs, although I have to say that his Style worked better with the rough and gritty sounding Amiga soundchip. Even the remixes of his own songs seldomly reached quality of the originals. 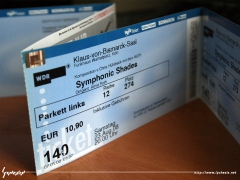 That said I can safely claim that “Symphonic Shades” was worth it. The songs that were played worked well with the orchestral arrangement (most of the songs were arranged by Jonne Valtonen aka “Purple Motion”) with only the odd deviation into the strange.
“Gem’X” had a man hitting coffee cups for percussion which sounded a bit strange and den symphonic rendition of “Shades” had a real synthesizer playing lead which sounded a bit out of place and ever so slightly out of tune.
The only real letdown was the Turrican II theme which was supposed to be some sort of journey through several classical ages which was either to high for me or just simply failed to recreate the atmosphere and ‘power’ that was behind the original. I also expected the Turrican 3 Piano Suite to be good but it was souly played by a finnish piano virtuoso called Jari Salmela who raced through the theme rather faster than his fingers could move and I rather missed the orchestral accompaniment which would have given the ending theme so much more emotion.
Apart from these small gripes the songs were very good. The X-Out theme was great, R-Type was fantastic (although a slightly jumpy beat struck me as weird), Tunnel B1 was brilliant despite being fronted by a 5 minute percussion solo.
“Karawane der Elefanten” was the only new song and as such failed (in my eyes) to convey any sort of Hülsbeckiism, but that may only be me wanting to hear something I can recognize.

There will be a Soundtrack CD of this concert in late 2008 which is supposed to feature all Songs from this evening. As it will feature recordings made during the week up to the concert itself it should probably sound more balanced than the live concert and maybe the timing issues will also be corrected (I’m no expert in symphonic music but there were parts where some parts of the orchestra semed to lag behind the rest but because I have seen this happen in professional soundtrack recordings I am not quite sure if this isn’t some kind of special rhythm thing). 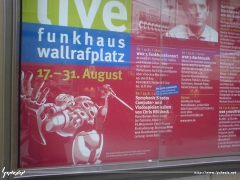 I will have an eye out for the CD and I hope there will be new opportunities for videogame concerts when (or if) the Games Convention comes to Cologne next year (but there have been signs of Leipzig putting up a fight so there may be two events next year very close to oneanother that’ll both be only half baked).

It was nice seeing Chris Hüslbeck personally attending this event and we even managed to get him onto the stage for the final applause as he prefers to stay in the background. But as a musician he has made a name for himself and an impressive legacy ranging over two decades in the videogame industry.

One last thing that struck me when seeing the audience at the concert was that they were all round about the same age, my age, all with their love and enthusiasm for Amiga and C64 music and one thing dawned to me: man, we’re getting old Laughing

Well, this is going in a different direction to what I was originally planing. But with time being as limited as it is and blog software being as good as it is I thought I’d save some time by not reinventing the wheel again by developing something that has already been done a million times before.

Now I can get back to doing creative stuff and have a rant every now and then.