I have started to play around with Microsoft’s XNA Framework in C# and, as a first project, started porting my old puzzle game “Colours”. I created that game 1992 on my Amiga in AMOS Basic and have ported it successfully to HTML/JavaScript round about 2004. Several attempts to port it to the PC in Blitz Basic / DarkBasic Professional failed because the languages were a little bit to basic for my likeing (and because I accidently deleted a prototype version that was quite close to getting finished). 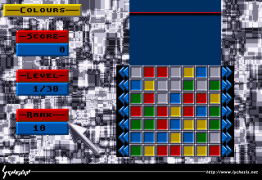 Starting with C# wasn’t quite as easy as I had hoped because I am used to PHP and doing everything myself. C# has load of features for handling variable scopes and breaks pretty fast if you try to be smart and ignore all that, which is what you can do in PHP. Also, the XNA Framework is huge and does loads of stuff for you, but if don’t know what structure it expects then you’re a bit lost.

There is a very good list of tutorials and websites for XNA and the basic things are very easy to understand. But some of the more advanced examples work very differently and aren’t documented very well which leaves you out in the cold as soon as you have understood the basics. Maybe the Creators Club is better but I haven’t yet decided if I will manage to keep going long enough so that the 100$ membership fee won’t be wasted. 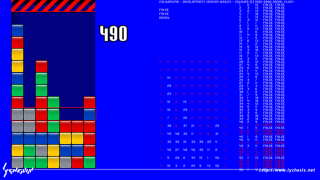 At the moment I have the blocks, playfield, gravity, colour reactions, cursor movement and score counting running. I still need lots of graphical effects (such as exploding blocks, score overlays and the whole gui) on my todo list as well as everything outside of the actual game. I also have lots of ideas on how to extend the game from it’s 1992 feature set so that will be quite interesting to see those coming along.